Swordfish have always been considered nocturnal feeders and until recently have only been fished for at night. We have since then, developed methods of catching them during the day which involve dropping extremely deep to where they lay during the daylight hours.  During the daytime, swordfish live way down on the ocean bottom, in over 1000 feet deep.  A new method of fishing for swordfish, called Daytime Swordfish Dropping is a method of fishing for swordfish during the daylight hours, and has been hugely successful since its inception.

Daytime Swordfish Dropping is a technique that involves dropping rigged or live baits to the bottom using a very heavy weight. This heavy lead is necessary to take the baited rig all the way down the nearly 1,100 feet to the ocean bottom.  We typically use a 10 pound weight to counter the current and extreme depth.  Even with this heavy weight pulling down on the bait, we still only get about 20 minutes of bottom time before its time to reel in and start a new drop.

If and when you do hook up into a swordfish, get ready for the biggest fight of your whole life. Not only is there already 1,000+ feet of line already out there, swordfish take massive runs and use their massive size to battle you to the bitter end. They call swordfish the ‘gladiator of the sea’ and if you’ve ever fought one on rod and reel, you know why. A fight from the bottom with a big swordfish can last over an hour and the fight is always intense. The captain and mate are there to aid in the fight by maneuvering the boat, guiding the fighting chair and to give moral and technical support. Fishing is a team sport and it takes everyone working together to land one of these monster game fish.

On our daytime Swordfishing trips, we have to travel 15 miles offshore, deep into the Gulfstream current. Rather than running full throttle out to the fishing grounds as we do on our night Swordfishing trips, instead we troll our way offshore. The waters we troll through on the way out to swordfish grounds are prime territory for mahi-mahi, wahoo and tuna. You also have the outside chance of hooking into another one of the world’s most sought after gamefish, a blue marlin. You have to get very lucky to hook into a blue marlin, but it is a distinct possibility. When we reach our destination, we clear all the trolling baits and target swordfish using the dropping method. We always fish a couple surface baits while dropping as well, just in case a hungry sailfish, mahi-mahi or blue marlin swims up on us. You never know what could happen out there, anything could bite. After our Swordfish Dropping, we reset the trolling lures and troll the distance back to Fort Lauderdale inlet, hopefully adding to our catch with some more mahi-mahi, tuna or wahoo. This is a great trip for big game enthusiasts and when it all comes together can be the best fishing trip of your entire life.

At night, swordfish rise to within a few hundred feet of the surface to actively look for food.
Night Swordfishing is a totally different technique than daytiming. On this trip, we depart the docks just before sundown, usually at around 6pm. On our night Swordfishing trips, we blast offshore, running full speed instead of fishing on the way out. Trolling is not as effective without daylight, so on this trip we try to get out to fishing grounds as quickly as possible to get the most time we can for swordfishing.Fishing for swordfish at night is a special technique. We use large rigged squids or live blue runners for bait. Each rig is fitted with a strobe light approximately 12 feet from the bait, which flashes intermittently and attracts swordfish from a long ways off. Each bait is set at a specific depth using a weight to hold the bait down, and a balloon to keep it set at that exact depth. We stagger the baits at different depths, from 50′ to 300′ down, so that we are fishing all the possible water columns. This is a highly effective technique for catching swordfish. While daytime Swordfishing is sometimes better for bigger swordfish, night fishing for swords is the best way to catch multiple swordfish.

Just a few snapshots from our Swordfishing Charters... 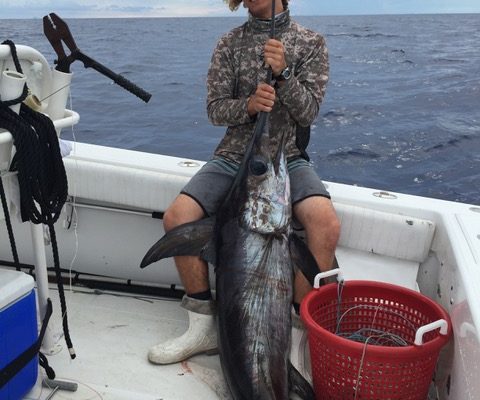 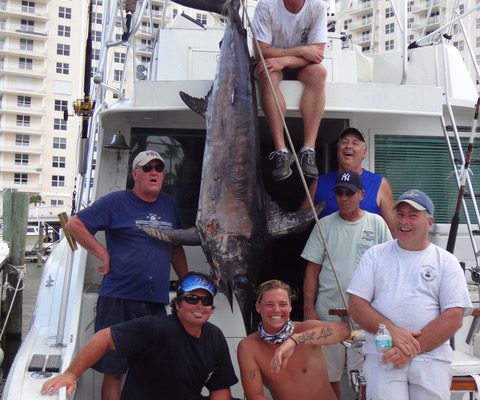 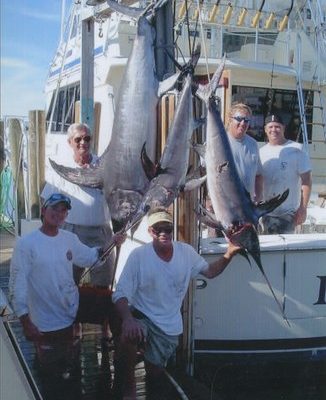 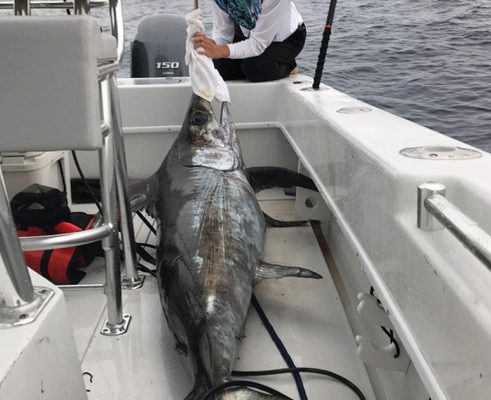 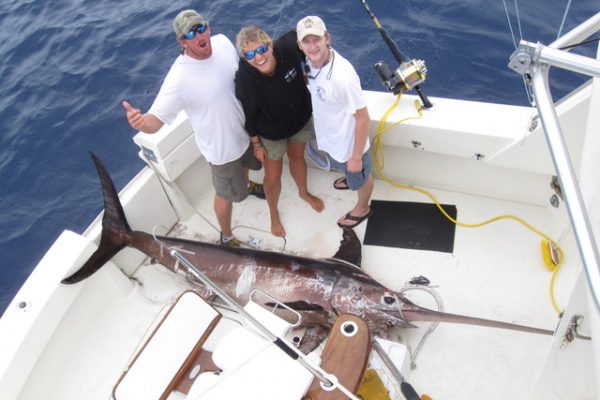 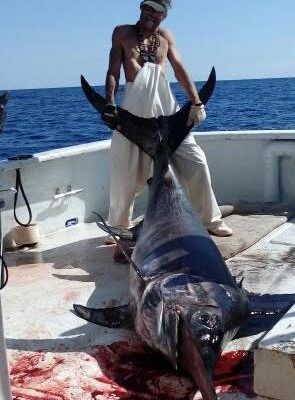